The Byzantine monastery of Nea Moni is one of the most remarkable monuments in the world and it is protected by UNESCO. It was founded in the 11th century in honor of the Virgin Mary and it is located in the center of the island (13 km away from the town of Chios).

The monastery was built under the order of Emperor Constantine IX Gladiator. According to tradition, three Chian monks had seen a vision, which heralded the return of the exiled emperor on the throne. Constantine IX Gladiator when he heard this good news, he promised the construction of the monastery as soon as he would return to Constantinople. According to the stories of the locals, the three monks decided to build the monastery, on the place where they found the miraculous image of Mary on a periwinkle.

The monastery covers an area of 17 acres and surrounded by stone walls. It includes an octagonal church with a dome type of unique architecture, a museum with exhibits of the monastery, a defensive tower, the cells and the Chancel table where the monks were having lunch, two churches and the water storage tanks.

It was one of the most powerful monasteries of the entire Aegean and it showed strong growth. In 1822, it was sacked by the Ottomans and all the monks who lived there were killed. The bones of the martyrs are kept even today in the monastery. Moreover, parts of the Temple collapsed from a great earthquake in 1881. It should be noted that despite the devastation that occurred throughout the centuries, the miraculous image of Holy Mary has survived until today.

What is more, they have survived from the 11th century until today excellent mosaics, produced by artists of Constantinople and they are among the three greatest collections of Byzantine art in Greece. When you visit the monastery, be sure to admire the cistern, a beautiful tank that was built in the 11th century and is consisted of domes and marble columns.

Molyvos - The Other Aegean 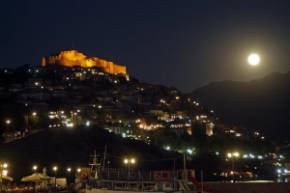 Small traditional village which is located in Mountain Pellinaio and it is surrounded by olive trees, cherry trees as well as with lush vegetation. Visitors can tour the village and... 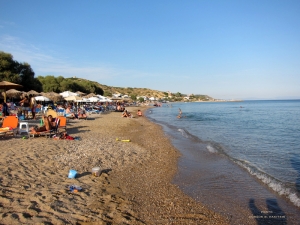 The popular and inviting beach at Komi sits at a distance of 25 km from the capital city, and its closest village is Kalamoti.  The smooth sand, crystal-clear waters and... 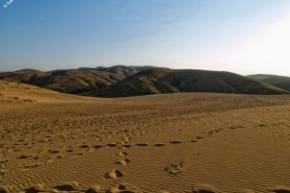 •    Vast, expansive areas of sand dunes creating an awe-inspiring landscape•    You’ll swear you just landed in the desert•    The most impressive of the sand dunes are called Gomati, in...

Temple of Apollo at Fana

Excavations made by K. Kourouniotis and the British School in the early 20th century, unearthed remnants of an ancient temple dedicated to Apollo in Kato Fana. It is an impressive...